Canadian cities still among most livable

Vancouver,Toronto and Calgary are numbers 3, 4 and 5 on a list of the world’s most livable cities, rankings unchanged from last year despite growing global instability affecting other nations’ positions.

The index measures 30 factors that fall under five categories: security, health care, education, infrastructure, and culture and the environment to assign a score out of 100.

The report noted a strong correlation between the cities at the very top of the index.

“Those that score best tend to be mid-sized cities in wealthier countries with a relatively low population density,” the report said.

“These can foster a range of recreational activities without leading to high crime levels or overburdened infrastructure.”

Six of the top 10 cities are in Canada and Australia, the report went on, which have a population density of 3.9 and 3.1 people per square kilometre, respectively.

The report also noted that violent crime may appear to be on the rise in some of the top cities, but the statistics tell another story.

In Vancouver, for example, the murder rate increased in 2014 after a record-low 2013. But those two years “were still the years with the lowest national murder rates in Canada since 1966,” the report said. 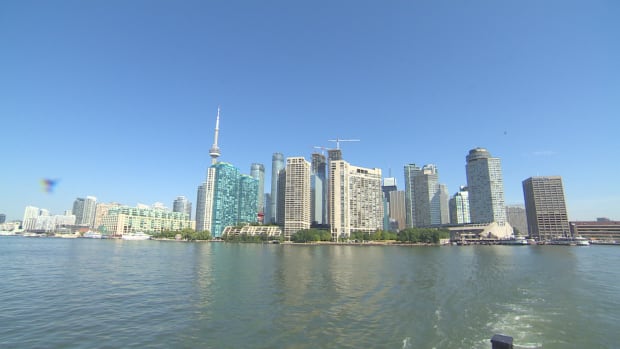 Toronto has kept its number 4 ranking on the EIU’s livability index. (CBC )

All three Canadian cities received top marks for health care and education, but their scores varied under the other categories.

On infrastructure, none of the three cities received a perfect score. Calgary received 96.4, Vancouver received 92.9, and Toronto 89.3.

The index ranks 140 countries, and many of the position changes this year can be attributed to growing instability around the world, the report said.

Sydney, Australia, for example, fell four places to move out of the Top 10, a drop that can be attributed to a “heightened perceived threat of terrorism,” the report said. This allowed Hamburg, Germany, to move up to tenth place, but also led to negative ranking changes for Frankfurt and Berlin, which “have experienced declines in stability,” the report said.

“Over five years, 96 of the 140 cities surveyed have seen some change in overall livability scores,” the report said. “Of these cities, 71 have seen declines in livability, up from 52 just six months ago.”

Join our Complimentary @MeetUp Group – See the Power of Your Connections and Get Instant Access to Member Pricing for Events ($200 Value) – Limited time offer!

I Have A Mouse In My House And I Love It!