When Reciprocity Fails in Social Media

Can trust be earned back?

What does reciprocity mean to you? If you use social media for business, reciprocity can be a strong pay-it-forward strategy. Actually, the act of trust-building and community-nurturing might just be the glue that makes the whole system work.

But what happens when someone slips up and breaks that hard-earned trust? Is there a saving grace? Last year in June, I traveled to NYC to talk about reciprocity in social media – and at a women’s prison where I used to work. The two are closer linked than you might imagine…

Being on Twitter is a little like knocking on the gates to the Emerald City. Oh, the wondrous opportunities waiting on the other side. But it comes with a price. Opening an account and tweeting is an invitation to the world that you’re available. You’re here to talk, get to know people, do business – whatever it is you want to do.

You have to give to get, pay to play, insert whatever cliché you like best.

With each person who follows you, an implicit contract is written. For their valuable time and attention, you agree to be authentic and honest. Although they’ll tolerate some marketing messages, you don’t have permission to fill up their stream with links to your products or services. And it’s mutual. They sign the same contract, which gives you the right to unfollow when they misbehave.

Key point – it’s your choice. Twitter doesn’t lock you into following someone just because they follow you. The choice is always yours. Stay and play or take your fun elsewhere.

Like real life, Twitter is filled with a smorgasbord of personalities. From weird Uncle Harry who’s always 3 sheets to the wind (even at 7 am) to that frenemy who says she likes you to your face but as soon as you’re not around, the air is blue with tales of your treachery.

And because Twitter can be like high school (or prison) getting caught in conflict is far too easy.

But let’s be real for a minute. We’re all on Twitter for a reason – we have a story to tell and we want people to hear it. That story might be about a product or service but it might be about your joys and frustrations and financial struggles as a single mom. It might be your way of staying in touch with your grandchildren.

When the importance of telling your story shifts to actually hearing other stories, you naturally eliminate conflict. It’s called reciprocity and relationships become stronger because people believe you’re there for them, not using them. When you remain competitive about telling your story, emotions run high and no one wins.

If these walls could talk

My Dad used to tell me that the bigger person walks away from a fight and I have to tell you, it’s no easier to do it on Twitter than it was when I was kid on the schoolyard. But I can also tell you, turning away, keeping your back straight and walking with purpose has the same effect now as it did back then. Dad was right.

When emotions get out of hand, there are ways to deal with it.

Some people feed off of conflict and are happiest when they’re stirring the pot. When you’ve exhausted all other channels – or if the conflict is just not worth the drama – move on. Unfollow the person and carry on with your other relationships.

There is no “one” right way to engage on Twitter – but there is a wrong way. I asked a few of my friends on Twitter if they’ve ever blocked someone. The answers were thoughtful, smart and, in my opinion, emotionally mature. Unlike some people I’ve blocked…

Trina_Stewart – Many wonderful forums, groups, and friendships that have been created because of it (reciprocity).

Spike_Mobile – I’ve unfollowed people who are negative or complain a lot on Twitter. I don’t want their bad energy bringing me down. It felt so good!

KWTFR – I’ll tweet you, you’ll tweet me, together we’ll encourage reciprocity 🙂 I believe trust can be earned back, but it would be a journey & take effort from all parties.

Dhatfield – If someone gets blocked – there’s a reason. Each of us create our own online experience and blocking is one way to do it. We should never have to explain or apologize for blocking someone online that is not contributing in a positive way.

MitchPopilchak – I tried to unfollow but that wasn’t enough, and it should have been. Personal circle. And I was grilled on it. I just did what some others wanted to do. Still standing firm. No regrets.

Karen_C_Wilson – I probably wouldn’t block someone I know unless we had a falling out. I have blocked non-bots tho

FlourishFlorals – Someone who tweeted racist remarks.

BrianJacklin – Absolutely! It’s my feed after all, right?

AMotherhoodBlog – I haven’t blocked anyone I know personally but I’ve blocked mean people who’ve upset me via twitter before.

What does your Twitter stream say about you or your company? What are your rules of engagement? 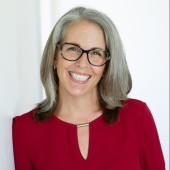 I'm the resident DotCominatrix for Women in Biz Network as well as Chief Girlfriend for GoGirlfriend.com. When I’m not traveling, I serve on various boards of directors and am currently the 2013 Chairman for Withit.org, a non-profit organization for women in the home and furnishings industries. I’m also co-founder of Canada’s first 140 Conference and its master of ceremonies as well as a presenter at TEDxWomen Waterloo, Impact99, Tweetstock.ca, Women in Biz Conference to name just a few. Connect with me online and let's continue the conversation!

Getting Clear on Your Goals

How to Make Your Customers Loyal | Advice from @SageNAmerica

Gift Certificate For YOU

Do you have a back up plan for your data? Advice from @pcserviceonsite #WIBN